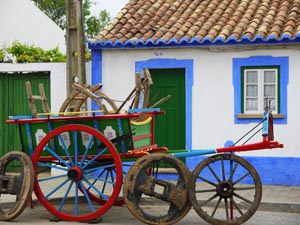 The beautiful Algarve region is situated in the very south of Portugal in the west of Europe. It is a longstanding favourite with visitors due to its sublime scenery, fantastic weather and wonderful places to visit. The coastline, over 150km of it on the idyllic shores of the Mediterranean, has warm, golden sandy beaches and fascinating limestone grottos to explore. There are isolated coves nestled under towering cliffs and vast stretches of inviting, immaculate oceanfront with resorts like Albufeira and Vilamoura providing an exciting base for exploring the region. Further inland, the orange groves and almond trees scent the air and remote little villages dot the landscape, charming you with their Moorish architecture and whitewashed walls.
The gateway to this relaxing part of the world is Faro international airport (alternatively you can drive down from Lisbon Airport). Flight times from London to Faro take roughly three hours. The airport is close to the town centre of Faro, with shuttle buses travelling the 4.5 miles on a regular basis. Transfers to the resort of Vilamoura is about half an hour, Albufeira about an hour, Praia da Roca Portimao 90 minutes, Lagos about two hours. This could be by private transfer, taxi or car hire. The route is spectacular in itself; you leave the airport on the IC4 following the signs for A22 for Faro and then the Portimao, then after approximately 10minutes join the main coastal road of A22 (Via Infante de Sagres)in the direction of Lisbon/Portimao, your journey will take you west until you cut south off the main route to join the coastal town of your choice. All the while you will be only about five miles from the clear blue sea. On your left, to the south, you will pass a profusion of quality golf courses, the Oceanico Pinhal, Millenium and Laguna are just a few. As you get closer to Albufeira, you may sport, to the south, the 12th-century Moorish castle of Castelo de Paderne, with the chapel of Nossa Senhora do Castelo, perched on a rocky peninsular. As you head west, the route will pass over many rivers, Ribeira d`Arade and Ribeira de Boina and give you scintillating views of wooded hills and rich, fertile farmland, little villages and larger towns.
The range of accommodation in the Algarve is fantastic; from rural villas, like the beautifully restored rustic Os Moinhos windmills at Messines, where the pace of life is very relaxed and tranquil, to modern Albufeira hotels, like the Riu Palace, with its highly recommended menu, incredible facilities and friendly staff. In this sun-kissed Portuguese paradise, you will be spoiled for choice and ensured of a visit that will leave you captivated.